This article is intended to give an idea of the collaborative process behind the sound design of a full-scale theatrical production. Each project requires a different approach, of course, but othellomacbeth involved making acoustic objects for the stage, making continuous soundscapes as well as specifically-timed effects, all while using sound to both unite and differentiate the two worlds. This wide range of requirements makes it a good subject for a case study; fair warning, it does go into quite a lot of technical detail at points.

When I started work on sound design for othellomacbeth, some elements had already been decided: Jude Christian‘s feminist reconfiguring of the two Shakespeare plays had a strong central conceit and a draft script, and Basia Binkowska‘s Linbury Prize-winning stage design was all but complete. Any sound design would have to fit into these existing elements, both conceptually and physically.

A brief introduction to the concept: Jude’s script reframed the Shakespearean plays by editing and reallocating lines to place more emphasis on the female characters in Othello, who are mistreated and murdered by the end; Desdemona, Emilia and Bianca are then reincarnated as the three witches in Macbeth, who proceeded to wreak an ultimately fruitless revenge on the male characters.

Generally, we decided that the show should tend towards sound rather than music; more specifically, Jude wanted the world to resist becoming musical. To invoke this sense of rejecting music, and to develop a consistent sound world for the show, I wrote a short piece of music which was then deconstructed, split up and fragmented throughout the show. I wanted to get something of the stories’ grandeur, which led to the use of multi-tracked cello and voice to provide a kind-of cinematic, orchestral feeling to the sound palette. The closest we came to allowing actual music in the show came at Macbeth’s coronation (where a rubato ‘cello melody was played over a bed of multi-tracked electronic and cello noise), and Macbeth & Macduff’s final fight (in which all the sound elements from the show returned, underpinned by the monotonous thudding of treated percussion). 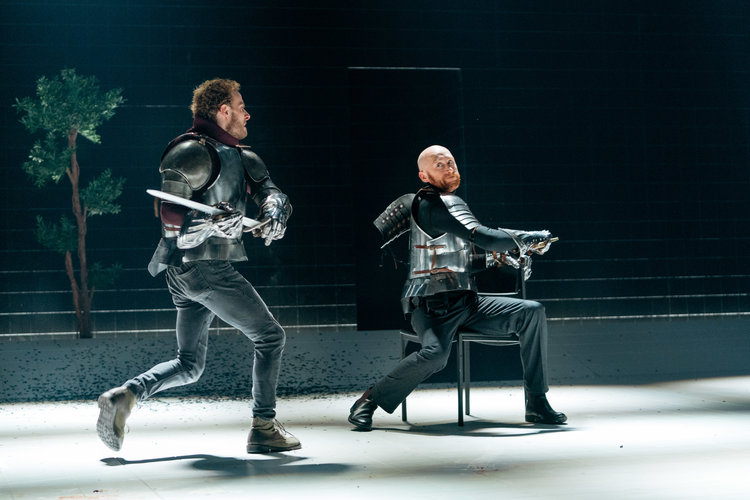 Jude’s version of Othello made extensive use of cuts, both in the sense of removing material from the script, and in the sense of rapid transitions between time and place (sometimes as a result of changes to the script). These transitions began as a jumble of of voices, layering lines from throughout the play on top of each other to run everything together; at rehearsals went on, they developed to be more musical and more obviously varied. They brought in percussive parts, as well as different sections of the multitracked cello chords, and ended with a sharp metallic clang as an audible reference to the claustrophobic aluminium guillotine that acted as the backdrop for the first half. 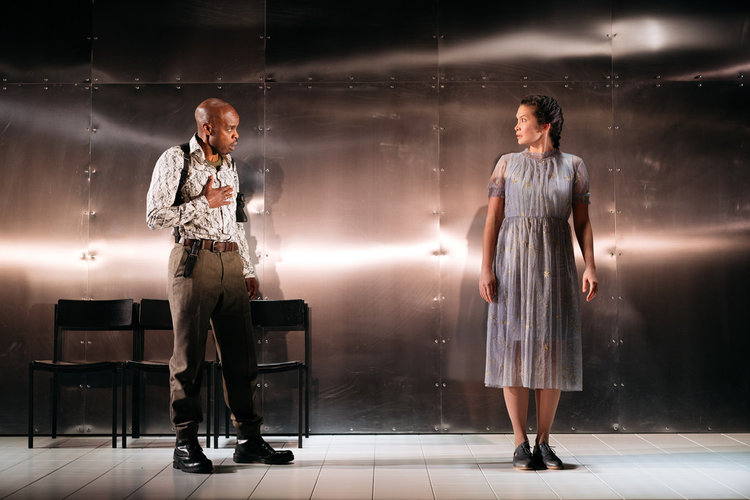 The guillotine (as Basia called it) was also rigged with two contact mics, essentially turning the whole structure into an enormous plate reverb. In order to emphasise the absolute power that some characters had over the world of the play, Jude wanted some characters to be able to affect the world and to create a more powerful effect than the others: Cassio and Iago’s display of masculinity through a petulant fight ended with Cassio being slammed into it, and Othello’s rage at being told he couldn’t see a handkerchief resulted in his striking it as well. The sound of these strikes was unexpectedly loud, and reverberated for a long time, punctuating the quiet, continuous atmospheric sound. The contact mics were also able to capture and enhance the nearby sounds of Desdemona’s being strangled, and to apply reverb to Iago’s gunshots that killed Emilia. 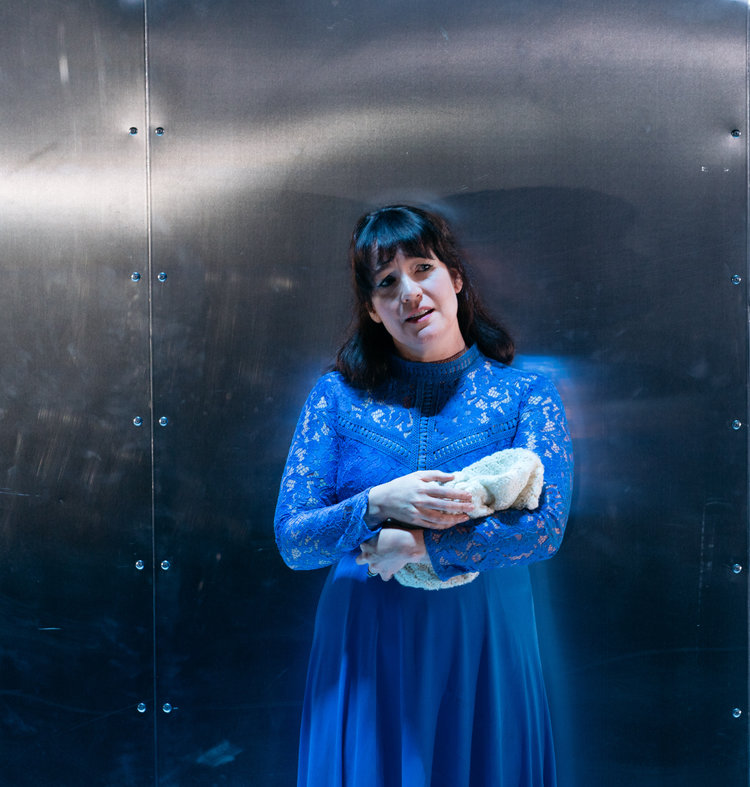 If Othello was the real world, then Macbeth was a hellish afterlife. As Emilia, Desdemona & Bianca rose from their deaths, Bianca began a speech originally given to Lady Macbeth, in which she seeks to remove her femininity to allow her to commit murder. The guillotine, which had cut off the limited the front of the stage to only a few metres’ playing space for the whole first half, suddenly flew away, accompanied by a cacophony of sound that had been bubbling under the surface of the first half, to reveal a blank, minimal wasteland that stretched back into the distance.

Come you spirits
That tend on mortal thoughts, unsex me here,
And fill me from the crown to the toe, top-full
Of direst cruelty. Make thick my blood,
Stop up th’access and passage to remorse,
That no compunctious visitings of nature
Shake my fell purpose, nor keep peace between
Th’effect and it. Come to my woman’s breasts,
And take my milk for gall, you murdering ministers,
Wherever, in your sightless substances,
You wait on nature’s mischief. Come, thick night,
All pall thee in the dunnest smoke of hell,
That my keen knife see not the wound it makes,
Nor heaven peep through the blanket of the dark
To cry, ‘Hold, hold’. 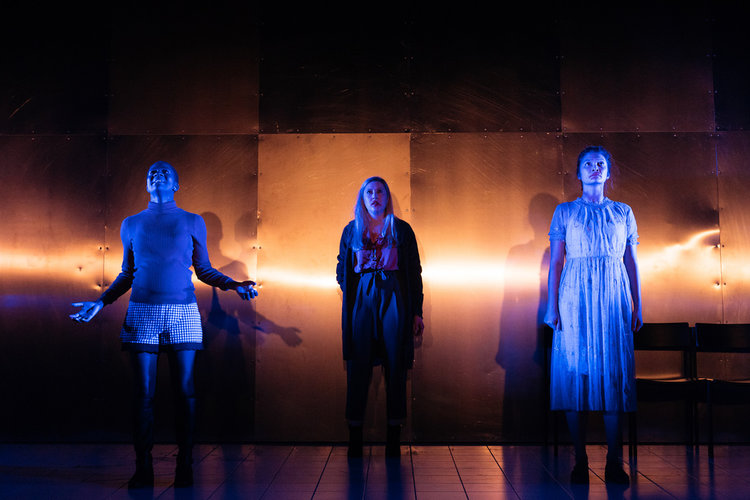 Othello had a constant low atmosphere of impossible spaces, mixed from various field recordings, and the play snapped quickly from scene to scene through the co-ordination of sharp lighting changes and precise transition sounds. By contrast, the world of Macbeth was much more smeared and drifting, with scenes blurring into each other, and locations being much less specifically defined. One of the problems we faced was in trying to highlight the similarities and the continuity between the two worlds, while also allowing that they were two sides of the same coin. One of the methods was to use the same sounds and to process them in a different manner: the sound world of Macbeth was much more electronic in tone – Othello‘s continuous atmospheres were processed through a bitcrusher, and automated to provide a more abstract, nearly-musical atmosphere to suit the blurred tone of the staging.

The bridge across the top of the stage was adapted to include a specially designed Long String Instrument (LSI); I’d heard about Ellen Furman’s use of very long strings, though I needed to design the entire thing from first principles, and to fit it in to the existing set.

My design of LSI, specific to this set, had 8 strings (four upstage, four downstage) strung above the bridge’s handrail, tuned to A Phrygian dominant – knowing that the bridge would have to be two different lengths at HOME and the Lyric Hammersmith,  it made sense to base the instrument’s tuning around the lowest note that could be made on the shortest bridge. The Lyric could accommodate a bridge a little over 8m (giving a frequency of 440HZ – A4) so I ended up taking the A4 as its lowest note and working from there. The drone of A and E became a recurring motif throughout the show, providing a bed for the witches’ LSI playing and essentially providing a home key for the entire of the show. 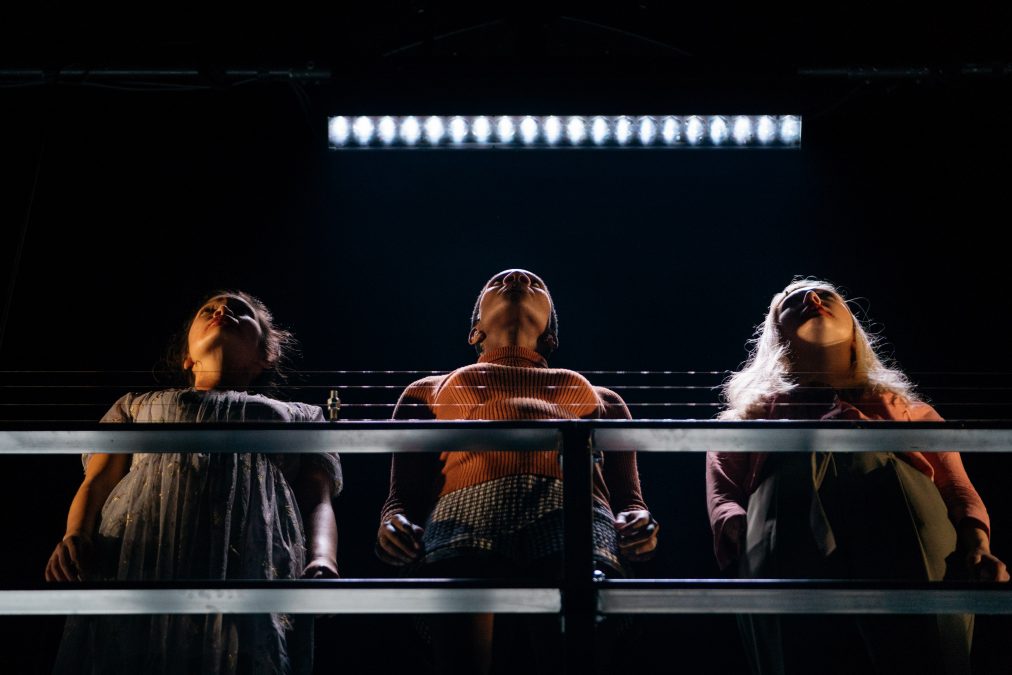 By constrast, the LSI is played by rosined fingers being dragged along the length of the string to create longitudinal (compression) waves along its axis. In this case, the pitch is determined by the material (sound waves travel at different speeds in different materials) and the length (longer strings sound lower); the thickness and tension of the string make no difference to the pitch, though tighter strings are easier to play. Playing in this way, an 8.03m length of phosphor bronze wire is needed to play an A4 (440Hz). The sound is thin and penetrating, rich in harmonics and with little sustain – to bolster it, it was played against a lower-pitched recorded backing; this combination allowed the actors to be very free and expressive with their playing, while not requiring too much time in rehearsal. 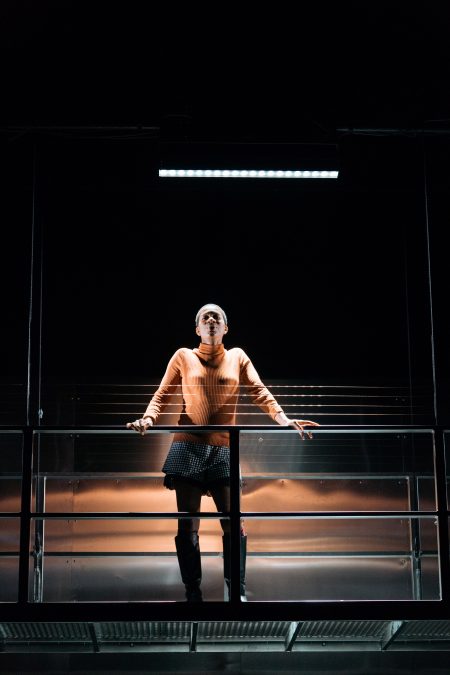 Initially, the staging would have had the witches on the bridge for the majority of Macbeth; if that had been the case, I would have written more musical pieces for them to play, and had already developed a simple notation system which allowed us to time the notes around the onstage dialogue. As rehearsals went on, however, two things became clear: firstly changes to the script meant that the witches would actually spend relatively little time on the bridge, and secondly that the available time wasn’t really enough to allow a full score for the necessary parts. As a result, the best approach was to tune the strings in a way that allowed the actors to work out their own parts, in a semi-improvised way, while supported and accompanied by recorded sound that would fit with the LSI’s harmony.

As part of the witches’ transformation, they were initially rigged with wireless microphones: they would quite often reappear onstage, portraying different characters and, when doing so, they could speak normally. When they spoke at the witches, in asides or unheard by other characters, they whispered into their microphones. After numerous technical rehearsals, though, it was just too difficult to get a consistently good sound, and these whispered lines were replaced by recorded versions and triggered as normal sound cues.

Ultimately, the sound design was quite an intricate affair, that involved combining live acoustic elements onstage and a very detailed recorded sound world; as with a lot of such work, though, the intention was always that it should be mainly taken for granted by the audience – changes should be apparent, but the continuous atmospheres should soon become part of the show’s furniture: not drawing attention, but providing a constant backdrop to the action.